First Week of Spanish Class Activities: How to Set the Tone for the Year 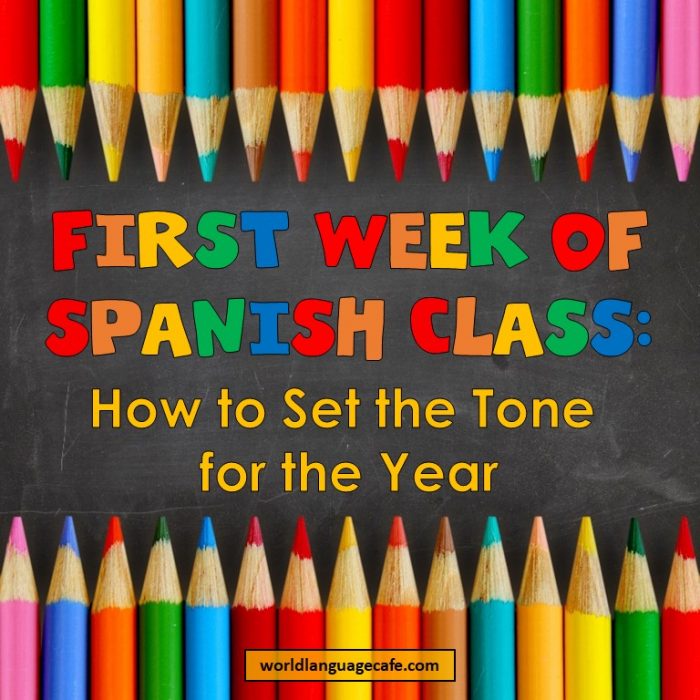 1. Be really intense the first week.

Start the first week of Spanish class with a serious, let’s get down to business, what we have to learn is extremely important attitude.  With some classes, I pass out a list of everything that we’ll be learning in class for the year and have the students read each line aloud.  Then I write the number of minutes of Spanish class that we have for the year on the board and say, “We have to learn all that information in ______ minutes. So let’s go!” (in Spanish, of course).  This stresses the importance of every single minute in class and shows them just how serious you are.

2. Give homework the first night.

Since many other teachers don’t do this, if you do, students will know right away that this teacher means business.  And don’t give a fluffy, easy assignment.  Give something challenging.  After all, they won’t have that much other homework that night and they’re fresh off of summer and ready to go.

3. Be flexible and adaptable.

My first year at a new school, I was given a class of 9th graders who had failed Spanish 1 twice previously.  This would be their 3rd attempt.  Yup, a whole class of students like that, every teachers’ dream.

I came up with a plan and was ready to go, but when I got to class, there were 31 of them and I only had 26 desks.  Needless to say, I had to scrap my original plans and go with the flow.  As teachers, we have to be very flexible and adaptable.  If Plan A doesn’t work, go to Plan B.  If Plan B doesn’t work, it’s on to Plan C, hoping and praying that you aren’t at Plan Z by the end of the day.  🙂 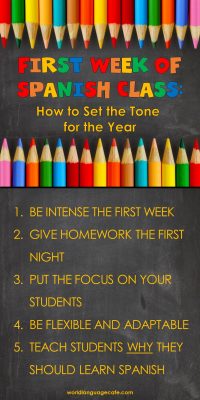 First Week of Spanish Class Activities: How to Set the Tone for the Year

4. Instead of letting the students focus on you, put the focus on them.

I often make my 2nd -5th year students do presentations the second or third day of class (even if it’s something simple such as a paragraph describing themselves).

For the best success, give them a structured paragraph with fill in the blanks (see below).  Include a sample paragraph.  At this point, if you give them free reign of what they’re writing and saying, they’ll make too many errors.  The goal is to model the language correctly and have them to produce it correctly.

If you assign this type of presentation, they’ll know you’re no joke.  They’ll be so worried about doing the presentation that they’ll stop focusing on analyzing you and figuring out your weaknesses.  That’s right – only show them your strengths the first week of Spanish class.  You are a demanding teacher who is passionate about teaching languages and expects their best behavior and work.

5.  Show them why it’s so important to learn Spanish.

Have them partner up and brainstorm as many reasons as possible to learn Spanish.  As your students share, write their reasons on the board.  Afterwards be sure to add these heavy hitters to the class list:

All you teachers out there, you got this!  You’ll be amazed at the difference throughout the year if you set a strong tone during the first week of Spanish class.  So much easier to start off strict than to try to recover part-way through the year.

After reading this, are you still feeling nervous to go back to school?  If so, check out my post about teaching tips to get excited for the first week of Spanish class.

GET 25+ FREE LESSON PLANS!
GRAB THEM NOW!
2 Comments
Share:
Previous Story
Why I Urge You to Teach 100% in the Target Language This Year
Next Story
French First Day Activities 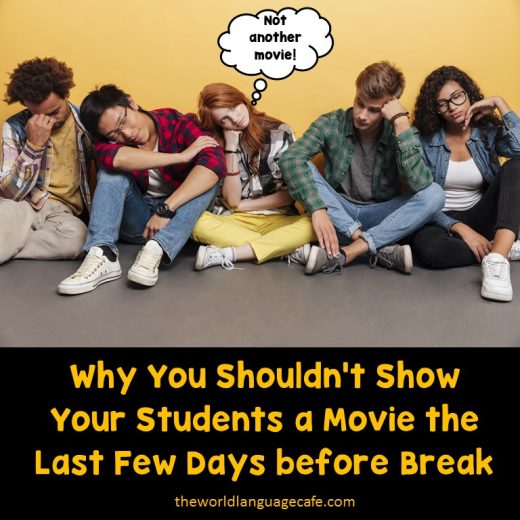 Spanish Activities Before Break or Vacation 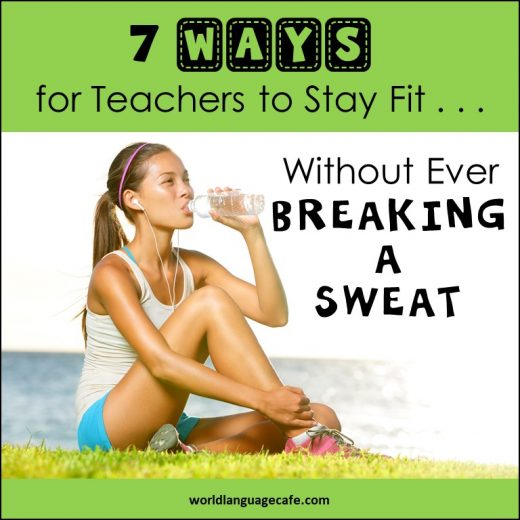 7 Ways to Lose Weight without Exercising 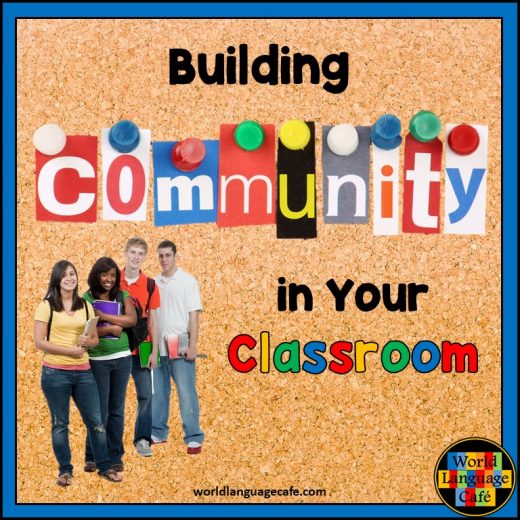